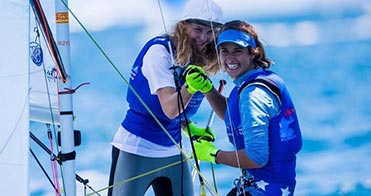 During 2014, Alexandra Stalder and Silvia Speri, from Fraglia vela Peschiera, met each other during the local regattas. Fabrizio Marzocchi, Silvia’s trainer advised her to try to go boating together and the coach Michele Gallina suggests to Alexandra to try. They buy a used boat and start going on 420, coached by Luigi Stellario Rago.

In 2015 they started together this new adventure at the Fraglia Vela Malcesine, but each still belonged to their old club. They immediately find a great feeling and with time established an extraordinary complicity. From the first moment they worked hard to improve their skills on this new boat. In the same year they qualified for the world championship in Japan, but they renounce it due to the high costs involved in the trip. They become part of the U19 National Youth Group with coach Gianluigi Picciau. In 2016, they bought a new boat and thanks to the continuous effort they are selected for the European Championship in Hungary, the World Championship in Sanremo and the ISAF World Championship in New Zealand. In Hungary they get the bronze medal and in New Zealand they won the silver medal. Thanks to these results the Italian Sailing Federation assigns them the title of sailor of the year. In 2017 they are selected for the European championship at Riva del Garda and for the World Championship in Australia but they give up because they decide to start a new adventure: 49erFX in the Olympic class.

Thanks to the results obtained at the youth level and the victory of the U23 World Championship, they are contacted by the Italian Navy to represent it in subsequent regattas.

They are enlisted in July 2020 post-pandemic and begin a new path with a new coach and with the support of the Italian Sailing Federation.

The goal now is to win a medal at the 2024 Paris Olympics in the waters of Marseille.